I thought I would add an extra post to talk about my cats, mainly because they are my world and I think they are cute.

Spock is the eldest of my two, he is a maine coon cross. This is him as a fluffy baby.

He’s grown quite a bit since then and has calmed down a lot as he’s grown up. He is a massive softy, giving me cuddles several times a day, he sleeps by my feet at night and takes everything that happens in his stride. He’s so chilled out that he actually enjoys going to the vets, probably because he loves attention.

Here’s a couple more photos of him. He is currently 2 years and 3 months old. 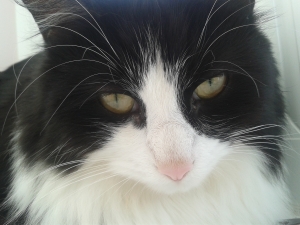 Harley is our youngest cat, when I went to pick her up she was in a state and I couldn’t leave her with her owners. She was attacked by their dog, they were feeding her adult cat dries and the vet said that she was probably four weeks old. We also found out later that she had half a reproductive system and only one kidney. Here she is as a kitten 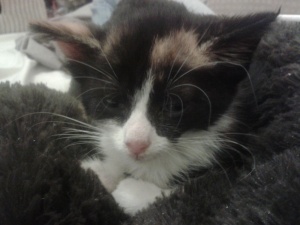 Harley is named after Harley Quinn from Batman, she is a funny little character. She’s very timid, loves it when the postman brings us letters, likes to steal fruit to lick and plastic ring pulls to scoot along the floor.

My cats may play fight but they do love eachother, Spock is almost a father figure to Harley, often giving her a bath. Harley doesn’t reciprocate. Here’s a couple of photos of them together, the first was the first time I allowed them to be near each other for a length of time (after Harley had a chance to grow because Spock was a large kitten) and the second was taken last week. 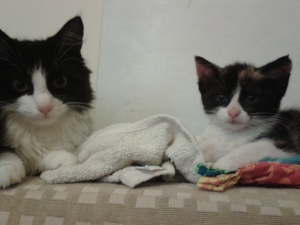 Anyway, hope you enjoyed finding out a little about my feline friends. More reviews are on their way,