Evening everyone, hope you had a great weekend. My fingers are crossed that I can sleep tonight without my fire alarm tripping off!

I’m going to take a break from reviewing products from my Flowbox to talk about some things I picked up in Holland & Barrett. I was going out for the day and wanted to know that I had something to eat so I got a two packs of Cheatin’, one lamb style doner kebab slices and one pepperoni style slices. Now I have never eaten kebab meat before, I stopped eating meat when I was 13 and kebabs don’t really seem like something a teenager should eat anyway. 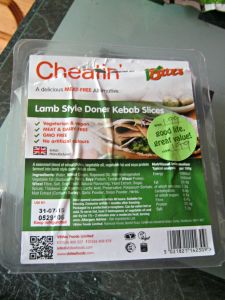 These slices are soft, moist and taste very faintly like Quorn lamb, the slices are greyish in colour and look kind of sad to me. There’s not too much flavour in the slices and they are a little greasy, but maybe this could have been avoided by cooking them. I ate the whole packet cold and by itself so it may have been different in a sandwich. I also made various family members try a little of the slices and they told me that it tastes very much like kebab meat so I guess it could be a good substitute if that’s what you’re into.

I also ate half the pepperoni style slices straight from the packet, I have had this variety before and I saved some for a sandwich after I got home. The pepperoni is a little spicy and full of flavour, again the slices are soft and moist, although not as moist as the kebab meat. 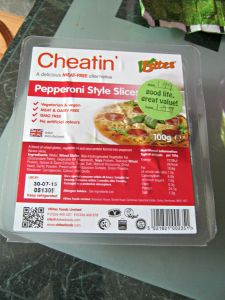 I put too many slices in my sandwich, I filled the bread with five of the slices and only olive spread. In hindsight I should have put some salad in there too but it was just a bit too thick with ‘meat’ for my preferences, and a little dry. I do like the products in the Cheatin’ range, and am excited to try the maple bacon rashers in the future. I picked up both of these packets for £1.79, down from £1.99 as they were reduced.

Enjoy the rest of your weekend, here’s to Monday!