This is the one before last product from my Flowbox, Primrose’s Kitchen raw carrot, apple & cinnamon muesli (400g). 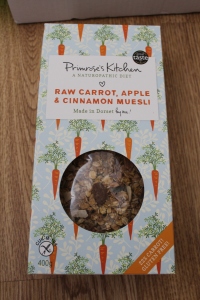 This muesli has gluten free oats and contains actual carrot. I never thought I would see a cereal with vegetables in it! As well as the carrot the muesli contains cinnamon, apple, nuts, seeds and psyllium husks, among other ingredients. This product is slowly dehydrated at low temperatures to preserve nutrients & enzymes, is high in fibre and is also a source of lauric acid and potassium so it is very healthy. The ingredients in the cereal have many great benefits such as almonds, which are a source of healthy fatty acids, protein and minerals. The apple is full of fibre and antioxidants and the carrot provides a plethora of vitamins. Additionally, the chia seeds contain fibre, omega 3, protein, calcium, and antioxidants. As well as this the cinnamon balances blood sugar levels and is an anti-inflammatory.

So with all these massive benefits this probably has to be the healthiest cereal in the world! I ate the muesli with soya milk and it really soaked it up, hydrating the dried ingredients. As much as the cereal sounds like it’s going to be an explosion of taste, and really delicious, but I wasn’t fussed on it. There were just a few too many ingredients for my preferences, I prefer something simple for breakfast. In addition, the cinnamon was very overpowering, I only like a small amount of cinnamon if I am going to eat it as it isn’t my favourite spice. However, the texture was nice, it was soft with bits of crunch, and I liked the variety. I also thought that the muesli was visually appealing.

You can pick up a box on their website for £5.95. In case, like me, cinnamon (or another of these ingredients) doesn’t appeal to you, Primose’s Kitchen also make a raw beetroot & ginger variety which is the same price. In fact, I was pleased with the range that this company stock. Their products include three seed and nut butters, two smoothie boosters, a beetroot and seed sprinkle, and two varieties of granola. The prices for their products range from £4.95 to £11.95 so it’s not cheap, but reasonable enough for brilliantly healthy and well thought out products.

Have a great night! 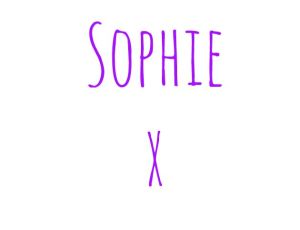