I’ve been looking for healthy snacks recently because as much as I love crisps, they aren’t great for my skin. I came across Inspiral’s website while doing some research and their prices were reasonable so I thought I’d give them a go. I got two products, the first was the sweet chili and mint Kale-o’s, I’ve had kale chips before but these were usually coated in nut butter of some sort, these were different.

They were basically dried curly kale with a seasoning and were leafy, not crunchy. This wasn’t exactly what I was looking for (I like a good crunch), and kale and I don’t have the best relationship but I managed to finish the bag. The flavour of the kale is deep, rich and tastes like iron, as you’d expect. The chili leaves a little tingle on the tongue which is good, I wouldn’t have wanted more chili taste than I was given. The mint is fresh and cool, a good addition to the chili, and both flavours work well with the kale. In addition, this product is 98.9% organic, so that’s a positive. While they weren’t for me, and I kind of knew that from the beginning, if you love kale then you should give these a try. They also stock tomato and basil pizza, and sea salt and lime varieties which sound delicious. I paid £1.29 for this pack, and the Kale-o’s are on a three for two offer.

I also picked up a pack of smokin’ coconut pecks, buying these was one of the best decisions that I have ever made. You’ll know by now that I adore coconut in most of its varieties, but these are something else.

I usually eat plain coconut chips but having a savoury seasoning is such a good idea, and something I never imagined I would eat. I’ve made my own coconut ‘bacon’ in the past and the flavour of these was quite similar. They were moist but crunchy at the same time and full of nice, smoky flavour. They were absolutely heavenly. I bought this pack for 99p, their website is offering a buy one get one half price offer at the moment. Inspiral also make a raspberry variety of the coconut pecks which could also be interesting to try. The coconut pecks are a great source of vitamin B1 and are 97.7% organic, both these and the Kale-o’s come in biodegradable packaging.

As well as the Inspiral products I got a 20g pack of Itsu crispy seaweed thins, these are such a great product with so many health products and as I like seaweed in veggie sushi I thought I’d like them. 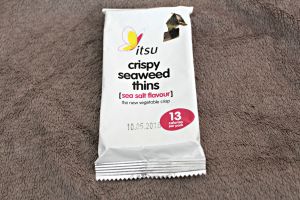 I was wrong. While the product also contains seaweed, oil and salt, and is high in vitamin B12, high in iodine, high in protein, fibre, iron and zinc, it was the flavour which upset me. I have never liked fish, even when I ate meat as a child, so eating something that was very much the flavour of the sea just didn’t agree with me. The thins melt on your tongue and also come in a compostable bag but I wouldn’t buy them again. This is just a personal taste preference, and if you don’t mind a very ‘sea like’ flavour then snack away. I picked up this pack for £1.80 at Sainbury’s.

Have a great evening, hope you had a lovely weekend

One thought on “Inspiral and Itsu”