I’m hosting a Twitter chat tonight but I thought I’d post this quickly beforehand (and also because I lost a 1000 word post on here earlier and can’t be bothered to write it again right now). I went and bought another free from chocolate bar, this is basically the bar I reviewed here but it’s also got an orange flavour. As much as I didn’t like the plain bar, and found it too sweet, this bar was amazing. Like, seriously amazing. It smells really deeply of orange, and its flavour is strong, which I liked. You can taste the cocoa more in this bar than in the plain bar, which is strange, but the flavour goes really well with the orange oil. I will definitely be going back for more of these. I bought the 35g bar for 50p at Sainsbury’s so in my opinion it was great value. 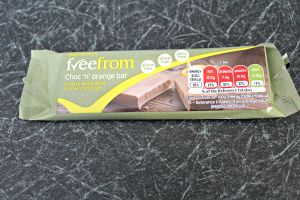 I’m also going to review another free from product, this one is from Tesco. It’s the free from white chocolate buttons, I wasn’t fussed on these. There wasn’t much of a flavour to them, and they were very sweet like all the other free from chocolate, with no real chocolate flavour behind it. It was also weird that they were kind of like nipple shaped rather than proper buttons. They melted away as you ate them, and were just generally disappointing. I won’t be buying these again. This 25g packet was 45p, so they were fairly cheap.

Hope you have a great night