I finished work last night at 9pm and I’m back in tonight at 9pm. I hate night shifts! I’ve just had breakfast for dinner because it’s my favourite meal and I’m hoping I make it through tonight and back on the bus tomorrow morning without falling asleep.

When I saw that Sainsburys had made a vegan apple pie I didn’t care that it was from their Basics range, I had to try it. It is a fairly large pie which is obviously made for more than one person but I ate the whole thing to myself, twice. Oops.

It takes about half an hour in the oven and it comes out piping hot, the top is crispy and the bottom was a little soggy but I liked it like that. There is a good amount of apple and sauce inside, the apple was soft but held it’s shape, the sauce was sweet and delicious. My only problem with the product was that some of apple pieces still had a bit of skin attached which was quite annoying but maybe to be expected from a cheap product. I paid £1.55 for the 550g pie.

You can’t really have apple pie without custard so I also picked up a pack of Alpro’s custard, it says on the pack that you can heat it up but I decided to have it cold on top because the pie is already quite hot. Putting cool custard on top means that you can tuck in quicker. It comes in a little carton and is the easiest thing ever because it’s ready made. It was thick, sweet and had a vanilla flavour. It was the perfect partner to the pie and while I wouldn’t say that it tasted exactly like dairy custard I think I preferred the taste. I paid 90p for the 525g pack, which is a bargain in my opinion, especially since you could easily get two portions from it. 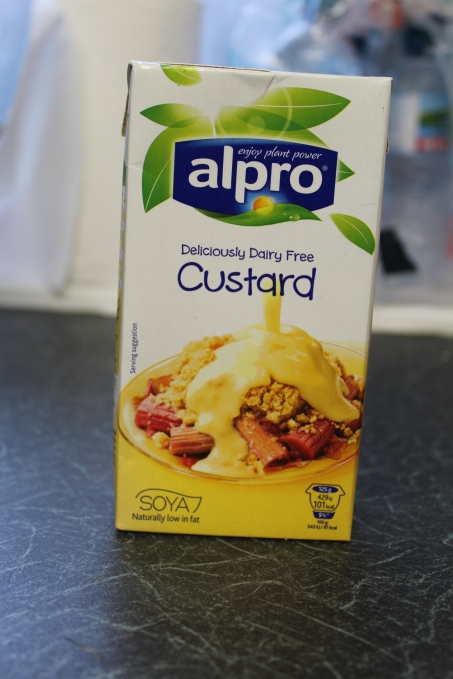 Hope you have had a good week,